On Tuesday 28th June, I ran a doubles tournament at Massey's club. I decided to even things up by pairing people up so the cumulative grade of each partnership added up approximately the same as other pairings. In theory, if you pair 2 players graded 150 and 50 together, and put them up against another pairing graded 130 and 70, it should be a close match more often than not. At least this was my theory, but there was only one way to try it out, and that was putting the idea into practice. So, with a little consultation with Simon Weaver, I put the following pairs together : Ed Goodwin and Paul Williams, Howard Jones and Clive Osman, Simon Weaver and Paul Sweatman, Bava S and Jacob Junior and finally myself, Dave Ireland, and Simon Junior. Jacob and Simon Junior are two young players who have very recently joined our club, and are aged 11 and 9 respectively. I don't know what their surnames are, so for the purposes of this post only, I will give them the imaginery surname of Junior. Also good to see joining in were club newcomers Bava S and Paul Williams.
The format was pairs play all other pairs twice, once with either colour, making a total of 8 games for each pair. Each side had 10 minutes per game. Each player within their respective partnership made alternating moves, with no consulting or advice allowed during a game.

The results were as follows :

From my point of view, there were two expected things that happened. One was that the games were often very topsy turvy, with wild fluctuations. This was due to the disparity in the gradings and experience within some of the pairings, as well as the fast time control; ,and it made for some very interesting games, and sometimes unpredictable results. The second expected occurance was the almost total lack of draws; as far as I know, there was only 1 draw during the entire night. If you'd seen the games, you might be surprised there was even one draw !!
So, bearing in mind the anticipated wild games, and random results, the one really surprising thing is that so many matches ended up in an overall draw, ( each match consisting of 2 games ). Considering virtually all games were decisive, and the fast time limit, I wad surprised how many pairings managed one win apiece against each other. I know I said that matching pairs into equally cumulative grades would even things up, but I never expected things to be so close between most pairs. In fact, the tournament went right down to the last match. When me and Simon sat down to face Howard and Clive, we had to win both games to pip Bava and Jacob for overall honours. Watched by the majority of the other contestants, me and Simon won the first game, but it just didn't happen for us in the second game, which we lost.
I guess Howard and Clive made the most stable and 'equal' partnership, because their games seemed the most balanced overall, and they drew all their matches. The one partnership that seemed to struggle, at least results wise, was Ed Goodwin and Paul Williams. I'm not sure why; but I think when me and Simon played them, we won both games on time, so perhaps the time control was a factor that affected their results. On another day, they'd probably achieve a fair share of wins, so maybe it was just what happened on the night.
I think everyone that participated enjoyed it, particularly our potentially young superstars of tomorrow, watch out for them in years to come !!

So the overall scores were :

Hi, this is the first time i've posted something on the web ever, and it concerns the first tournament I've ever run.

Meeting at Massey's each Tuesday for chess social nights seemed ok, but I wanted to vary the format a bit, add a little bit of competitive enjoyment, and encourage more interaction among the members.

For a start, I didn't even know the names of some of the members playing in the 2nd and 3rd divisions, and they probably didn't know mine.

Most Tuesdays, various players seemed to be playing the same opponents again and again, with seemingly liitle variety, so I thought i'd arrange a 5 min tournament, which ran on 14th June.

It proved enjoyable for most; out of the ten players that entered, eight completed all rounds. There were a couple of withdrawals midway through though; Clive seemed to struggle with the format, but I think 5 minute chess can be unsettling for those not used to it. Mike Johnson also had to leave early, albeit still in realistic contention. Wesley enjoyed a good tournament, finishing second, with the ever solid Howard Jones and club newcomer Bava finishing joint third.

Another new player, John Loughnane, accrued 10 points, with Paul Sweatman managing a solid 9 points. Two players new to 5 minute chess were Perry and another newcomer Dave Howlin. Perry enjoyed the quick pace and got 6 points, whilst Dave finished on 4 + 1/2. Although finishing nearer the foot of the table, Dave was one of two players to gain a win against me, the other being Wesley.
So the format was all play all twice, once with either colour, making a total of 18 games.
The full results were :

With the success of last weeks 5 minute chess tournament, Dave Ireland has kindly agreed to organise other tournament next Tuesday 28th June. It will probably take the format of doubles chess.

So if you wish to try something different and have a bit of fun come along next Tuesday!

Club Openings over the Summer

As normal, the club will remain open over the Summer holidays for friendlies.

FUN TOURNAMENT Dave Ireland is going to a run a five minutes on the clock tournament on the 14th June. Just turn up at 7.30pm at the club to enter. Open to all players.
Posted by Simon Weaver at Saturday, June 04, 2011 No comments: 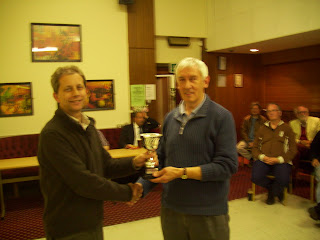 Pete Smith receiving the Runners up trophy for the Summer Cup 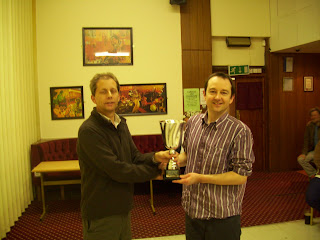