Round 5 produced some more exciting games especially Dave Ireland against Ed Goodwin. The game ended as a draw however Ed only had 2 seconds left on his clock ! (Dave had just over a minute) This is where a digital clock really does come into its own as everyone could clearly see exactly how long each player had left. Ed played well especially as he had the black pieces.

Mike Donnelly and Bava also had a very close game, Mike informed me he sacrificed a piece but just couldnt quite break down Bava's defences and so they both agreed a draw.
Stan Whitmore continued his excellent form and yet again despite being outgraded, he got a draw against Dave Filer

Paul Sweatman continues to have a good Tournament and despite Pete Smith having two pawns on the seventh rank Paul managed to fight back and force a draw. Paul has only lost to Dave Ireland so far in the Tournament.

Clive Blackburn is also having a good run, his only loss was in the first round to Mike Donnelly and he won last night against Gordon Cornell.
Mike Johnson has not yet lost a match (although he did miss one week due to holidays) and won his game last night.
David Adams and Ian Evans played a very good game, coming down to a difficult end game but finally agreeing a draw.

What does all of last night's results mean for the trophy's ?

Clearly, Dave Ireland is in pole position to win the Summer Cup however if he looses next week to Mike Donnelly then he could let in Ed Goodwin or of course Mike Donnelly.

The Gordon Cornell trophy is also wide open with Stan Whitmore and John Conway on 3 points both leading at the moment. However there are a number of players on 2.5 points - Clive Blackburn, Pete Smith, Paul Sweatman who are all still in real contention - All depends on next weeks results.

I thought it was interesting that the first game to finish was well past 9pm, showing that all players were fairly evenly matched. I think this shows how a Swiss Tournament should work - that eventually all players end up playing other players of roughly equal playing strength and gives everyone a fair chance to play an opponent of equal strength.


So, final round next week and then we have our AGM the following week where we hope as many club members will join us in the election of new officers. Hopefully everyone has received a letter from Dave Filer regarding the AGM, if not let me know and I can let you have a copy (I have uploaded a copy in the Facebook group for those members on Facebook)

Match results from Round 5 (23rd May) 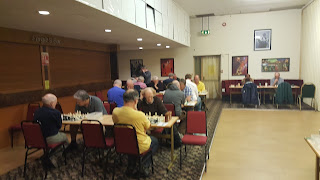 
The fourth round produced some very good games. Dave Ireland won again so he is clearly the player to  beat at the moment. He is closely followed by Ed Goodwin and Mike Donnelly both on 3.5 points.
Stan Whitmore continued his good form and won against Howard Jones. Paul Sweatman also won against David Adams and is now another challenger for the Gordon Cornell cup.
Roy Watson and Clive Blackburn had a marathon game with over 80 moves! but they agreed a draw with only a King and pawn for Clive and a King and two pawns for Roy.

Here are the results from last night (16th may)

We are now already half-way through the Summer Cup and a clear leader in the Tournament has emerged - Dave Ireland. Although he is closely followed by Ed Goodwin,Mike Donnelly, Bava and Dave Filer on 2.5 points.

Last night produced some very close matches.Particular Ed Goodwin against Mike Donnelly. This match went down to the last few seconds on both players clocks before they agreed a draw, in a very difficult end game for both players.

Bava also won again with less then 30 seconds left on his clock against Howard Jones. Stan Whitmore continued his excellent run against higher graded players by obtaining a draw against Nigel Morris.

The challenge for the Gordon Cornell trophy is led by three players Stan Whitmore,Pete Smith and John Conway - all on 1.5 points.


As usual the next round is next Tuesday :- Round 4 Tuesday 16th May 7.30pm (We may have to wait for Zumba to finish again - depending on the progress of the Building work)


Another good set of Summer cup games in Round 2 with one or two surprise results. Paul Sweatman earning a draw with Clive Blackburn and Gordon Cornel getting a draw against Wesley Beeston are two results of particular note.

Althogh John Loughnane lost to John Harris he put in a great performance and analysis afterwards showed he could easily have won by playing a pawn one square forward. 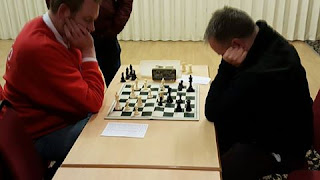 Next week will see the seeded players start to play each other, which should produce some exciting games.

Results from 2nd May

Round 3 Tuesday 9th May.7.30pm - Look forward to seeing everyone next week.