There will be an e2e4 Congress at Hinckley over the bank holiday weekend 24-27 August 2012.

Please note Massey Ferguson has advised us that the function room is not available Tuesday 19th June for friendlies.

However we can use the room at the back of the bar.

The Chairman,Secretary and Treasurer all gave their reports for the year.

Dave Filer as Chairman thanked everyone for their support over the season. With thanks going to the Captains for running the teams.

The change in the funding for chess by the ECF was explained by Dave Filer and the impact it will have on Coventry Chess Club.

Membership fees will have to increase next year as MF have imposed a room charge.

Simon Weaver gave an update on the progress of the website.

The digital clocks had not caused too many issues other than what to do when there is an illegal move.

The number of teams for next season will remain the same, unless we have a sudden influx of new players.

Finally - the club will be open over the Summer for friendlies.

The trophies were presented at the AGM of Coventry Chess Club to the winner and the Runner Up of the Summer Cup. 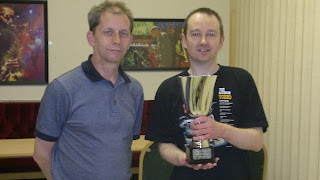 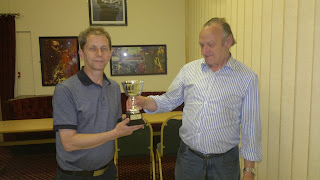 Congratulations go  to both players.

Ed Goodwin narrowly missing out on 2nd place there were also 3 players on 4 points. Well done to these players as well.
Posted by Simon Weaver at Tuesday, June 05, 2012 No comments: