Final Reminder for the Warwickshire Open

Just a final reminder to any player who wishes to play in the Warwickshire Open - it is this weekend and it is still not too late to enter.

I have copied the details from my previous post here:-

The Warwickshire Open Chess Tournament is coming back to Coventry in 2017 The 2016 Tournament was extremely successful and they are looking to build on the success from the last Tournament. We had a number of entries from Coventry players last time, so if you are interested in playing again then the details and entry form are here:- http://www.congress.warwickshirechess.org/

If you have any queries about this Tournament see Ed Goodwin who is the Tournament Director.

There are 4 sections, so plenty of opportunity for everyone to take part, no matter what your grade.

Sections Open Under 170 Under 145 Under 120 If there is only one Tournament you are going to play next year then make it this one and help support Chess in Coventry!


Of course, after the Warwickshire Open we have the next big Coventry Tournament The John Evans Summer Cup Tournament ! Details to be announced shortly when the First Round will commence.


Posted by Simon Weaver at Thursday, February 23, 2017 No comments:


Colin Green has asked us to remind all players that they should not bring their own food and drinks into their Venue at Nuneaton. They had an incident last Tuesday 31st January, where drinks were brought into the venue. This could have resulted in them loosing their venue as the policy of " NO own food or drink to be used in the club" is strictly enforced.

I would widen the request to include all venues that we play - most venues that we use, either provide facilities free of charge or a nominal amount of money for the evening and in return expect players to purchase their drinks from the Bar.

I know the majority of Coventry players respect this rule and as such has not been an issue at Coventry. However if you do notice an away player using their own drinks please politely remind them of  the House rules - Thank You!

Posted on behalf of Ed Goodwin:


“Chess set for sale
This is a wooden set bought in 1960 which is for sale.
The King height is 110mm with base diameter 35mm.
The pieces are felted and weighted.
The board has 50 mm squared.
If anyone is interested please contact Ed Goodwin at edgoodwin@live.com” 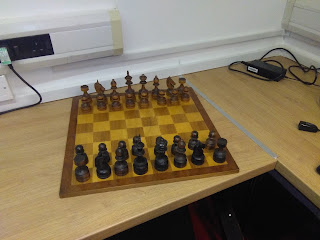 Posted by Simon Weaver at Wednesday, February 01, 2017 No comments:


The new grades for January are now on the ECF Website :-

Just a reminder that the Warwickshire Open Tournament is on in Coventry on the 25th/26th February.

Now we have the latest Grading record you can decide which section you wish to enter.

Here is the link for more details.